Ah, Valparaiso! The unofficial Arts Capital of Chile, the city of boheme, myths and legends, capital of street art, UNESCO World Heritage Site… There is plenty to see and do in this unique city. Many compare “Valpo”, as we call it here, to San Francisco, California, for all the colorful old houses built on the hills and the artsy vibe. There is some of that. But Valparaiso’s scenery is more spectacular, more hilly, more quaint… and poorer, also.

One of the many great things about this city, is that you can see and do all the main things in one day, but you can also wander around for days and days – which is what we encourage you to do. And because Valparaiso is mostly famous for its old funiculars, it makes sense to talk about what there is to see and do around each of them. As of October 2020, nine of them are in working conditions.

Here they are, by area:

Avenida Argentina is the wide avenue that marks the entrance of the city when you arrive from Santiago. Three days a week, there is a large fruit market and flea market in the middle of the avenue: it’s actually quite interesting to walk around, feel the lively atmosphere… just don’t take out your big cameras there!

Ascensor Baron (picture below): The closest from the bus station, this funicular is very little used (probably because the large mall nearby has a free elevator). However it is, in my opinion, the most beautiful one: large, neatly painted, and with a unique view. When you reach the top, it is a great place to enjoy the view over the city and the bay.

Ascensor Polanco: On the other end of Avenida Argentina, his one is really special: unlike the other funiculars that follow the slope of the hill, this one starts with a 120-meter-long tunnel, which is a bit dark and humid, a little bit creepy, you might say. Finally, you get into a real modern elevator – which is a bit disappointing.

But once you get out on the upper level, you will find yourself inside a tower that is looking over the neighborhood and the entire city. It’s surprising and beautiful. I recommend you to walk back down, as there are many beautiful murals there. Careful though: there are pickpockets in this area, so keep your big cameras hidden in your bags.

Ascensor Espiritu Santo: Completely rebuilt a couple of years ago, this one is interesting as it gets to the entrance of the Open-Sky Museum, on Cerro Bellavista. This hill is less visited than the popular Cerro Alegre, Cerro Concepcion and Cerro Artilleria (see below), but it has some beautiful features as well: the Open-Sky Museum, composed of twenty nice mural paintings and cute colorful houses, and the house of poet Pablo Neruda, called La Sebastiana.

This is a fascinating place to visit, as it features eclectic and unusual collections of objects from all over the world. This place gets crowded quickly: it’s better to go when it opens at 10am if possible. At the foot of Cerro Bellavista, there is also a beautiful mosaic called Paseo de los Sueños (picture below), that is not indicated in travel books but well worth seeing.

Ascensor Reina Victoria: Named after Queen Victoria of England, this is one of the most popular funiculars of the city, as it reaches the lower part of Cerro Alegre, in the heart of the Historical District. The upper end of the funicular is also very scenic and lively, with street vendors and often live music. Cerro Alegre and Cerro Concepcion are both part of the UNESCO World Heritage Sites: this is where you will find the oldest and most beautiful houses of Valparaiso, but also the main mural paintings, the famous “piano stairs”, and all the best restaurants.

One of the port city’s specialties is pastel de jaiba, a kind of crab cake that is very creamy. And if you are really hungry, share a typical chorrillana with a friend (basically a mountain of beef, onions and French fries); if not, go for an empanada. For something more fancy, go to La Concepcion restaurant: the best in the city in my opinion.

Ascensor Concepcion: Also known as Ascensor Turri, this is the oldest one. First built in 1883, it has been completely renovated a couple of years ago. It is less nice though than Reina Victoria and El Peral, the two other funiculars that you will find nearby – but it’s very central, and near the restaurant La Concepcion I just mentioned above. From there, you can walk to the beautiful Paseo Atkinson, and also take my favorite street of the city: the long Pasaje Galvez (picture below), which winds down on the side of the hill, featuring great street art and a couple of quaint staircases.

Ascensor El Peral: One of the most used funiculars in Valparaiso, as it goes from the main square Plaza Sotomayor to the hill of Cerro Alegre and the Fine Arts Museum, aka Palacio Baburizza. It’s better to take it to go down – much less crowded! This area is quite touristy, but it’s also one of the most beautiful in the city – and car-free!

This part of the city is poor, so here as well, be careful with your belongings! Don’t take big cameras out of your bag.

Ascensor San Agustin: This funicular is not as well-maintained as the others – probably because it reaches a much more modest area of Valparaiso. I would not recommend you to take this one, because the hill where it goes to is not the safest in town.

Ascensor Cordillera: While it reaches the same hill than Ascensor San Agustin, this funicular is much nicer and scenic – especially from the bottom. It connects downtown to the lower part of the hill, where you will find some beautiful mural paintings and a quaint square. You can choose to go back down using the very long and cute staircase (picture below) instead. 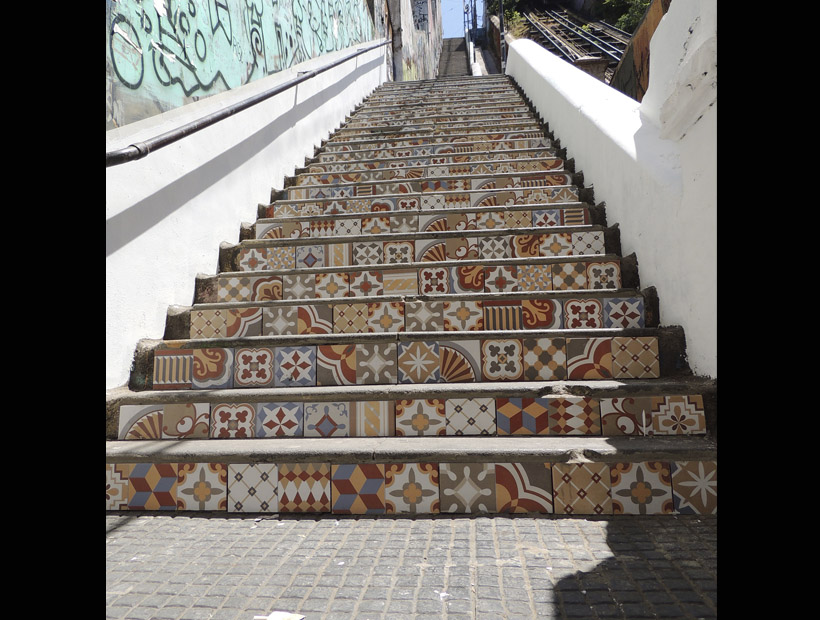 Ascensor Artilleria: The most famous and largest funicular of the city. This one gets you to Paseo 21 de Mayo, the most visited viewpoint over the bay and the port. If you are in Valparaiso just for one day though, I would not recommend you to go there: it takes time to get there, there is often a long line to get in, and it’s very touristy once you make it to the top. Ascensor Baron is a much better option.

My itinerary for roughly 5 hours, starting from the main bus station:

If you have more time:

If you don’t feel like doing this is all by yourself, there are plenty of group tours going for the day from Santiago – but you won’t have the freedom to wander around and discover Valparaiso by yourself. You can also organize a private tour that will allow you to take your time and design your own itinerary – but it’s another budget of course!

And if you are into street art, there are street-art related tours in Valparaiso; and even cooler: with Chile Private Tours, you can organize a tour where you get to meet a local artist, and paint a piece of wall with him! That’s a very cool and unique experience, and what a better place to do that than the unofficial Arts Capital of Chile?

What about the nightlife in Valparaiso ?

Valparaiso hosts a lot of cheap bars around Plaza Anibal Pinto and Plaza Ecuador, just below the UNESCO Heritage district. In some places, you will find a liter of beer for 2 dollars! And if you feel like going to a disco, there are plenty on Avenida Errazuriz, near the seafront. El Huevo, nearby, hosts live concerts regularly.

Chileans tend to party late, and to party hard: don’t expect things to really get started before 10pm in the bars, and midnight at the discos. And don’t dress up: things are very casual in Valpo. And it’s better if you don’t carry any bag or purse with you. Just bring some Chilean money, your ID, and you are good to go!

There is a lot of spontaneity here, and it’s quite common to find yourself at an afterparty with people you just met, looking over the sunrise after a very long night! Enjoy!